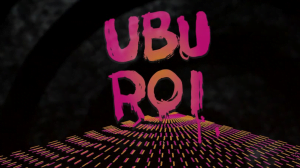 Stagger me sideways! King Ubu, usurper to the throne of Baloney, carries a mop instead of a sceptre and dreams of his ‘Pâté de dog’. Meanwhile, he liquidates enemies and friends. Under his reign citizens face unbearable taxation and crippling whimsy, until someone calls for revolution… Alfred Jarry’s Ubu Roi is an absurd comedy which caused riots and launched the European avant-garde. Ludens Ensemble transform Ubu into a big old bash for four performers, interactive videos, a live DJ, puppetry, shadow-play and object manipulation.
Supported by the Cyprus High Commission.