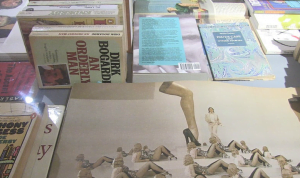 Sex Symbols in Sandwich Signs takes its title from a damming review of David Storey’s novel ‘Radcliffe’, which was critical of all the qualities Sutcliffe admires, namely its bleak, alienating narrative and ‘garrulous’ characters. The exhibition pulls at the seams of identity, expanding upon recurrent themes in Sutcliffe’s work: self-doubt, obsession, cultural constructs and class conflict. Central to the exhibition, one of two new video works draws parallels between the story of Radcliffe and the unrequited homosexual fixations of British filmmaker, Lindsay Anderson, toward possessive actor, Richard Harris. The exhibition also features a collection of working notes and images from Sutcliffe’s personal archive associated with previous video works, placing emphasis on the central role of collage within his creative thought. Sex Symbols in Sandwich Signs marks the publication of the first catalogue exclusively dedicated to Sutcliffe’s work, with essay and interview contributions from Ilsa Colsell, Michelle Cotton and Dan Fox.

‘Radcliffe’ is referenced within the exhibition with the kind permission of the Estate of David Storey.