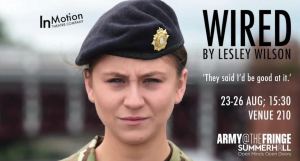 ‘They said I’d be good at it.’ The story of a young woman soldier’s journey through post-traumatic stress by award-winning playwright Lesley Wilson, developed in collaboration with the British Army. Following training, Joanna is deployed to Afghanistan and believes she is prepared for what lies ahead. What she is not prepared for is a visit from her past. As the realities of war close in around her, Joanna struggles to make sense of the voices, memories and flashbacks that wage war inside her head. Originally developed with support from Playwrights’ Studio Scotland and Tron Theatre Creative.