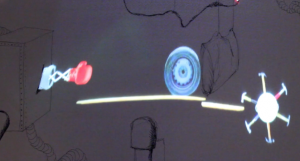 The Butler Gallery, in association with Kilkenny Arts Festival, presents the influential film The Way Things Go (1987), by world-renowned Swiss artists Peter Fischli (b.1952) and David Weiss (1946-2012). This thirty-minute film was shot in a stark warehouse where automobile tires, garbage bags, and plastic water jugs take centre stage, rolling, twisting, and exploding in what seems to be an unstoppable chain of motion, both simple and complex. The film displays a forensic attention to detail, wherein Fischli and Weiss’s devotion to detritus injects a burst of humour into the seriousness of the art world.

In honour of the 30th anniversary of the making of The Way Things Go, a group of artists has been commissioned to make a new work in homage to this important film. These include Aideen Barry, Hannah Fitz, Atsushi Kaga, Nevan Lahart, Jonathan Mayhew and Caroline McCarthy. Also included is work by artists who have a particular sympathy with, or relationship to, The Way Things Go. These include works by Maggie Madden, Isabel Nolan and Liam O’Callaghan. All of these artists have acknowledged the importance and influence of the work of Fischli and Weiss on their individual art practice, and have created works in a variety of media that pays tribute to one of the truly inventive and memorable works of art produced in the late-twentieth century.

With thanks to the Arts Council for essential annual funding and to the OPW and the Department of Social Protection. Thanks are extended to the additional exhibition supporters: Kilkenny Arts Festival, Pro Helvetia the Swiss Arts Council, OPW and Kilkenny County Council Festival and Events Assistance Scheme 2017.