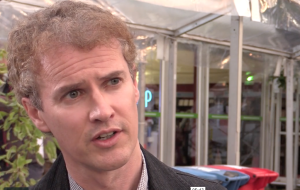 Colin MacIntyre may be more familiar to some as the man behind Mull Historical Society. Under this pseudonym he has become one of the UK’s most respected songwriters and performers, releasing four albums to critical and chart success. Now Colin has proven his talents aren’t limited to songwriting with the release of his first novel.

‘The Letters of Ivor Punch’ is an original and enthralling novel that takes place on an island where a headless horseman is said to stalk the woods but where the kirk is always full. It’s a story about fathers and sons, secrets and lies and how, sometimes, you have to leave home to know what home is. Although unnamed, the island setting of his novel is perhaps inspired by Colin’s upbringing on the isle of Mull where he grew up with a family of writers and storytellers.

Tune in to hear Colin MacIntyre in conversation with Ali Millar on writing and music at the Edinburgh International Book Festival.