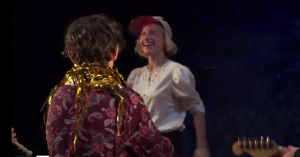 Music’s power has erased boundaries before, but can it make us feel connected as citizens, even after Brexit? Last year, theatre maker Marieke Dermul researched if such a thing as a European identity or a common European sense exists. With this question in mind, she took a journey through Europe. By collecting opinions and musical input by citizens from all over Europe, lyrics became a collection of fears and doubts, music became a symbol of hope and the popsong for unity arose. This is that story.