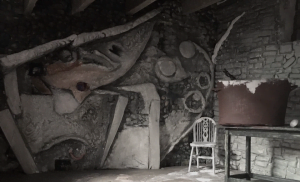 This a conjectural model of Schwitters’ last day at the MERZBarn in Elterwater. Only … it seems the final flourish of plaster across the corner (all that remains in the Barn after the wall’s removal to the Hatton), was added later by Harry Pierce or his son, both of whom assisted Schwitters. ‘Kurt Schwitters has left the building’ is the title of an exhibition being worked-on at MERZ with Martin Green for the 2018 Edinburgh Festival at Summerhall which also features paintings by Schwitters.