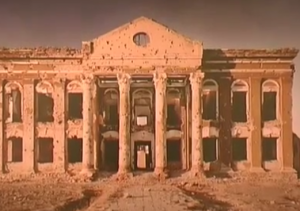 A film from Northern Visions TV, Belfast. Photographer Simon Norfolk discusses his exhibition ‘Afghanistan : Chronotopia’. Shown as part of Belfast Exposed, Norfolk’s exhibition is a series of landscape photographs of Afghanistan during the war at the start of the 2000s.

Taken between 2001 and 2002, Norfolk captures the opening stages of the war launched after the attacks in America on 9/11. The photographs captured during this period document yet another layer of destruction added to an area that has known very little else, other than decades of continuous warfare. The landscape almost becomes something of a museum of the war. Tanks from the Soviet invasion in the 1980s lay abandoned in the countryside, some becoming part of the infrastructure as they are utilised as footings for bridges or embankments.