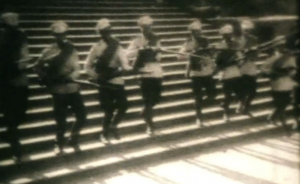 Red Star’s 1982 account of the workers’ film movement of the 1920s and ’30s, showing the influence of the Comintern Cultural Policy and the 4th International on European documentary film-making. During the 1930s 16 and 9.5mm film stock was used by labour movement activists. By turning the cameras on their own lives and trade union experience they were able to articulate rank and file expectations against the rise of fascism across Europe.