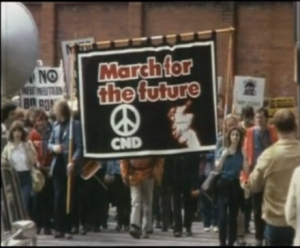 Red Star Cinema was set up by artists, printers and friends involved with Rock against Racism and School Press. Red Star’s initial aim was to screen fortnightly newsreel clips of labour movement activity and demonstrations from across central Scotland. On Saturdays, the day of mass demonstration, the news crews of the established TV broadcasters were preoccupied with coverage of football. Reliant upon police estimates of demonstrator numbers the view presented by TV under-estimated the numbers and the broad spread of popular involvement.

The Red Star newsreels reminded those involved that we were more numerous than the broadcasters (and Government) would have the public believe.

Red Star hired feature length movies to accompany its short newsreels. After a few months short documentaries were produced – Lothian War Plan being an early effort. Many of the demonstrations in the early 1980s were focused on the risk of nuclear war, on the Government’s propaganda of ‘Protect and Survive’. Lothian War Plan dramatises details uncovered for the protection of local government and military capacity at the expense of civilians in an around Edinburgh in 1981-82.

A longer film – War Zone – covering anti-nuclear activity from across Scotland in 1982 is being digitally remastered for release on Summerhall TV later in the year.