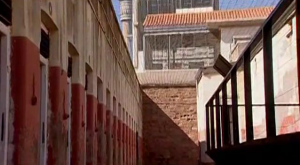 From Northern Visions NvTv, Belfast. The Arts Council Conference The Grand Opera House was the venue for the Arts Council conference, which this year focused on the issues surrounding conflict and what place the Arts has within it. The programme contains a tour of the South African Constitutional Court with Justice Albie Sachs, showing how the court has been designed as a welcoming place for all South Africans and a memorial to people who died in their conflict. We talk to Sean Hillen, who designed the Omagh bomb memorial, about memorialising the Troubles and some of his artwork, which was made during the 80’s, such as his ‘Londonewry’ series. Zoë Lippett from the Wolverhampton Art Gallery tells us about their collection of artwork on The Troubles, and discusses why we don’t have a similar exhibition. And finally Glenn Patterson talks to poet Michael Longley about the poems that he has written about The Troubles and the stories behind them.