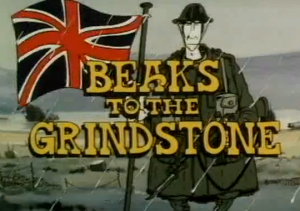 Bob Godfrey’s wonderful animation ‘factory’ was home to the much celebrated Roobarb and Henry’s Cat cartoon characters. Beaks to the Grindstone was a lesser known collaboration made for Channel 4 by trades unions in 1985 with Guardian cartoonist Steve Bell. Godfrey, who died on 21st February aged 91, was the ‘godfather of British animation’ and here provides a rich satire on youth employment starring Bell’s penguins. Its black humour portrays the scabby, exploitative and unsafe working conditions encouraged by the Conservative government in the 1980s. So, nothing new there then.