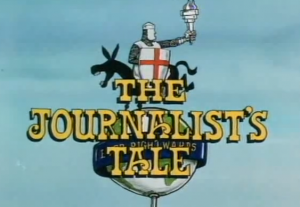 Second of the animations aired by Summerhall TV as a tribute to animator and cartoonist Bob Godfrey who died in February aged 91. The Journalist’s Tale was produced for the National Union of Journalists with financial support from Channel 4 (although we’ve no evidence the broadcaster screened the finished programme). Cut into small sections the animation provided headings for a recruitment video made for the NUJ by the Trades Union Resource Centre. The Journalist’s Tale is a timely reminder of the outrageous behaviour encouraged by newspaper proprietors decades before the years covered by the Leveson Inquiry.