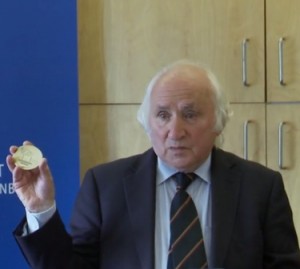 Richard Demarco received his European Citizen’s Medal on Monday 19th August. A ceremony was held at the European Parliament Office, with Scottish MEP Struan Stevenson, who nominated him, presenting him with the medal.

Richard Demarco was the co-founder of the Traverse Theatre, and later set up the Richard Demarco Gallery, which helped to promote cultural links with Eastern Europe.