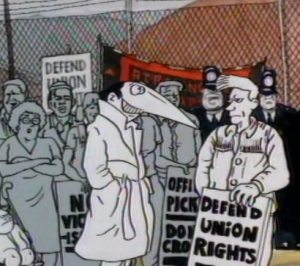 It’s thirty years since this animation was commissioned by the National Union of Journalists and Channel Four from TURC Video in Birmingham. Animated at Bob Godfrey’s wonderful studio in London the clip features Steve Bell’s infamous journalists Blockhead and Hardnose and their coverage of the Miners’ Strike. Although this animation was never shown on Channel Four the cartoon did feature in recruitment videos made with the NUJ in 1985.

On Channel Four’s reluctance, Steve Bell wrote: Despite being completed on time and on budget, neither [The Journalist’s Tale nor the animation made alongside Beaks to the Grindstone] was actually broadcast. The reason was entirely political. Other than being released on video, the films were only ever shown at the Cambridge Animation Festival in 1985. When questioned during the same festival about their non-broadcast, the then controller of Channel 4, Jeremy Isaacs, said that he did not want a situation where the likes of Ken Livingstone could “buy airtime”. Since neither Livingstone, the GLC, nor indeed any of the other sponsors, including Channel 4, had any influence over the script or the final edit, this seemed a little unfair.